Summary: On September 5, 2012, the Wisconsin Supreme Court heard oral arguments in a case that will determine whether the Wisconsin Department of Natural Resources (DNR) is required to consider evidence of a navigable water level’s effect on property values when deciding whether to grant a petition to raise or lower water levels.

Also before the Court is the question of whether the public trust doctrine applies to private, non-navigable wetlands located above the ordinary high water mark. This issue is of significant concern to Wisconsin businesses and property owners. If the Court of Appeals decisions is upheld, DNR bureaucrats will have nearly unlimited authority to regulate private wetlands above the ordinary high water mark.

The Great Lakes Legal Foundation (GLLF), on behalf of the Wisconsin Manufacturers and Commerce and the Midwest Food Processors Association, filed an amicus curiae (friend of the court) brief arguing that the public trust doctrine does not apply to adjacent private wetlands above the ordinary high water mark and therefore has no applicability to this case.

In 2003, the Rock-Koshkonong Lake District (Lake District) petitioned the DNR to raise the water levels of Lake Koshkonong under Wis. Stat. § 31.02(1) and eliminate a winter draw down, both established by DNR in 1991. Wisconsin law grants DNR the authority to regulate and control the level of navigable waters “in the interest of public rights in navigable waters or to promote safety and protect life, health and property.”

The Lake District argued that because the statute (Wis. Stat. § 31.02(1)) requires DNR to protect “property” when setting water levels, DNR is required to consider the potential economic impact on private property owners residing or doing business on Lake Koshkonong. Many businesses and property owners on Lake Koshkonong argue that the low water levels set by the DNR are negatively affecting their property values and businesses.

On July 21, 2011, the Court of Appeals, Dist. IV issued its decision in Rock-Koshkonong Lake Dist. et al. v. DNR, 2011 WI APP 115, 336 Wis. 2d 677, 803 N.W.2d 853. The Court upheld the DNR’s decision denying the Lake District’s petition seeking to raise the lake’s water levels. The Court first addressed the argument made by the Lake District that DNR is required to consider the impacts of water levels on residential property values, business incomes and local tax revenues. The court disagreed with the Lake District’s reading of Wis. Stat. § 31.02(1) and held that DNR is not required to consider potential economic impacts to adjacent property owners.

The Court of Appeals also disagreed with the Lake District’s argument that DNR exceeded its authority by considering the impacts of raising water levels would potentially have on adjacent, private non-navigable wetlands. In reaching its decision, the Court of Appeals held that the public trust doctrine contained in the Wisconsin Constitution required the DNR to consider the impacts of raising the water levels on the adjacent wetlands.

In addition, the Court of Appeals held that the DNR was required to consider wetland water quality standards under Wis. Admin. Code § NR 103, which were adopted under Wis. Stat. § 281.15(2)(b).

GLLF filed an amicus brief on behalf of the Wisconsin Manufacturers and Commerce and Midwest Food Processors Association arguing that the Court of Appeals erred by holding that the DNR had authority to apply the public trust doctrine to adjacent private wetlands located above the ordinary high water mark. Below is an excerpt from the brief:

The public trust doctrine, incorporated into Wisconsin Constitution art. IX, § 1 holds navigable waters in trust for the public up to the ordinary high water mark. The legislature has neither expressly nor impliedly delegated DNR the authority under the public trust doctrine to regulate wetlands above the ordinary high water mark, nor could it ever do so given the limitations of the doctrine.

Furthermore, DNR exceeded its authority by applying wetland water quality standards under Chapter 281 to a Chapter 31 water level order despite the fact that Wis. Stat. § 281.92 explicitly states that nothing in that chapter affects Chapter 31. The court of appeals ignored the plain language of Wis. Stat. § 281.92 and instead held that DNR had broad authority to apply regulations promulgated under Chapter 281 to non-navigable private wetlands.

GLLF also argued that the Court of Appeals erred by holding that the DNR had the authority to apply wetland quality rules that were adopted under Chapter 281 since Wis. Stat. § 281.92 expressly states that nothing in Chapter 281 affects Chapter 31, the statute granting DNR the authority to raise or lower water levels.

A decision by the Wisconsin Supreme Court is expected by the end of its term in July 2013. 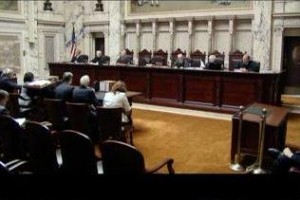 Click to view video of the oral argument on WisconsinEye.